ROTTERDAM, N.Y. (NEWS10) — One of the first radio stations in New York and in the country, WGY started broadcasting in the Capital Region in 1922.  As the historic station prepares to mark its 100th anniversary Sunday, NEWS10 ABC is taking you back to when it all started.

At 7:47 p.m. on February 20, 1922, WGY took to the air for the first time. The first program lasted 63 minutes, featured 11 musical performances, and concluded with a violin performance of “Ave Maria.”

Off the Beaten Path: Matton Shipyard

That historic night Kolin Hager, who would become WGY’s station manager, took to the air to say the following, “This is radio station WGY in Schenectady, ‘W’ for wireless, ‘G’ for General Electric, and ‘Y’ for the last letter in our city.” From that moment on, it was a new era in radio history.

The previous antenna was located on Building 40 of the GE campus, but it eventually moved to its current location at 679 Mariaville Road in Rotterdam. It’s twice as tall as the previous antenna, and it features thirteen miles worth of grounding wire.

Off the Beaten Path: Lindenwald

Located near the intersection of Interstate 90 and Interstate 88 in Rotterdam, the WGY tower is hard to miss. Standing at 625 feet, it’s a living piece of radio history.

Adirondack 100-mile challenge back and bigger

Adirondack 100-mile challenge back and bigger

Building bikes for kids in need

No threat to public after hydrochloric acid leak

Broadview raises over $200,000 in gifts for nonprofits

What did Albany Google the most in 2022?

SF votes against allowing police to use killer robots

Best gifts on sale today for under $50 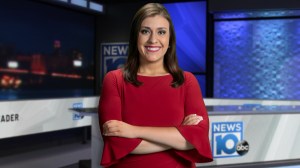 Hochul urges vaccines around the holidays

How to prevent RSV, flu & COVID this Thanksgiving

US to keep COVID public health emergency through …