EARLTON, N.Y. (NEWS10) — New York State Police have identified the body of the man found in Greene County Wednesday afternoon as a Troy man missing since early January. The case is now a homicide investigation.

Police say McMahon’s body was found by a hiker around 4:30 p.m. Wednesday in the Coxsackie hamlet of Earlton. The hiker told police she followed her dog into a wooded area and spotted the body.

Detectives from Troy and investigators with the New York State Police saturated the area in Greene County along Potic Creek Road for much of the day on Thursday. Evidence techs spent hours canvassing the area and a diver searched a nearby creek with a metal detector.

Police say the body discovered Wednesday belongs to McMahon, who went missing in early January, shortly after being released from the hospital where he was being treated for stab wounds. Troy Police arrested Salina Brown-Shook, McMahon’s on again/off again girlfriend, in connection with that attack.

McMahon’s landlord tells NEWS10 that he received a text from McMahon while he was still in the hospital saying that he feared for his life. When the landlord didn’t hear from McMahon for a few days, he filed a missing persons report with Troy Police. 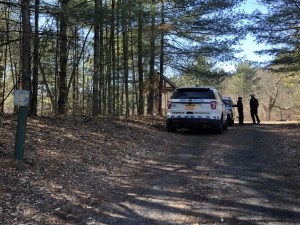 During the period since his disappearance, McMahon’s cellphone and credit cards went unused.

Officials determined the circumstances surrounding McMahon’s disappearance to be suspicious and called in additional detectives were assigned to the case. Last month, Troy Police even asked NYSP to send a helicopter to search along the Hudson River. McMahon’s home sits not far from the water in Troy.

Police say McMahon’s ex-girlfriend was still in jail at the time McMahon was reported missing.

Anyone with information regarding McMahon’s disappearance, even if you think it may be repetitive or unimportant, should give Troy police a call at (518) 270-4421.

SARATOGA SPRINGS, N.Y. (NEWS10) - During the season of giving, the Saratoga Broadway Deli is doing just that by donating roasted chickens to Capital Region residents in need.

Daniel Chessare is serving free hot roasted chickens and he wants to make sure no one goes hungry this holiday season.

Health Services staff are reportedly monitoring 51 active COVID-19 cases as of Sunday. One is hospitalized in critical condition. Forty-nine others have mild illness, while one has moderate illness.One reportedly involves a person who had been on the Queensbury Union Free School District campus last week. Find the school district's statement on the matter here.