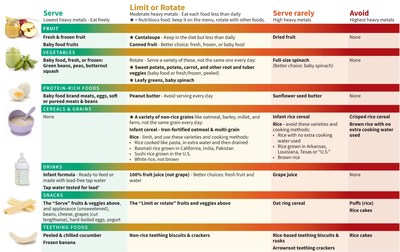 We found detectable amounts of toxic heavy metals in 94% of food samples: both baby foods and the "adult" equivalents

HBBF wanted to know if the DIY work-around actually works. To find the answer, HBBF tested 288 foods and examined FDA data from 7,000+ additional lab analyses. The top findings were:

"Parents shouldn't have to worry about the safety of their babies' meals and snacks," says Jane Houlihan, HBBF's Research Director and the lead author of the study. "But until the FDA sets protective limits, the good news is that parents can skip and swap out certain foods to limit toxic chemical exposures."

Until foods with reliably low heavy metal levels are widely available, parents can choose and prepare foods in ways that significantly reduce babies' exposures by following HBBF's Parent Guide: The Data-Driven Guide to Healthy Baby Food. A healthy, varied diet avoids inadvertently ingesting too much of one heavy metal and ensures an important mix of nutrients.

Research continues to confirm lifelong deficits in intelligence from exposures to these common food contaminants: children in the U.S. lose an estimated 11 million IQ points from birth to 24 months of age from dietary sources of lead and arsenic.

Despite these risks, with few exceptions, there are no specific limits for toxic heavy metals in baby food. To date, the U.S. Food and Drug Administration (FDA) has set or proposed limits for heavy metals in only two baby foods—infant rice cereal and juice—leaving the burden on parents to navigate the risks for all other foods.

"FDA's Closer to Zero program needs to live up to its name and set limits that will make the heavy metal contamination of our food much closer to zero," says Charlotte Brody, RN, National Director at Healthy Babies Bright Futures. "This study shows that lead, arsenic, and other heavy metals are in all baby food brands, fresh produce, and packaged family brands. To get the levels of heavy metals meaningfully closer to zero, FDA must go beyond the baby food aisle and set strong standards for these contaminants."